Temps hovering just below freezing, clear skies, with a beautiful super moon providing the luster of midday to PAX of Depot below!   Who knew that this idyllic morning would end in tragedy….

As YHC planted the shovel flag in the permafrost, he noticed the numbers growing and some folks we hadn’t seen for a while.  There was Stagecoach, fresh off a 4 month boot camp and 1 month Kiawah taper, looking fresh and relaxed with perhaps a hint of malice in his eye…just speculating.  Then out of the gloom arrived HIM TNT, fresh off a two week trip out West, preceded by 9 months of active duty in the Middle East helping keep us all safe!  No malice detected, but he did bring with him an aura of chicken shawarma which made the PAX’ mouths water.

After a quick disclaimer, YHC produced a full page weinke, with 24 point arial font as Hostel quickly identified (the man knows his fonts).  Before I dig into that though,  YHC had originally planned on 30 minutes of calf raises, captain morgans, and arm circles.  After that, Laettner would warm all of our cars up and we’d circle them up. We would then do a group facetime where we could continue the “riveting” discussion from the Depot chat about who has the best “sock game” and what types of golf cart batteries were sub-standard.

That was not to be unfortunately, as today was our inaugural F3 Lake Murray wide workout, courtesy of our brothers at Foxhole!   Which Foxhole PAX would be responsible to kick off the region wide Q for 2020….

Would it be bearded outdoorsman and Greek bodybuilder Brother Si-Opoulos…

It turns out that today’s Q was designed by non other than Spano himself.  Upon hearing this, the PAX responded appropriately….

Spano’s reputation is to provide an ass-kicking beatdown every time he steps up to Q and today’s menu did not disappoint.

-20 Block Thrusters (or Thirsters if you prefer)

Note that this being Depot and our men made of harder stuff than your average PAX, our loop was actually 0.26 miles and included some elevation up and down the hill.  As a result, all of our numbers should actually be multiplied by a factor of 10. #ExtraCredit

Have the PAX track completed reps. Each full round is 100 reps.

After a brief instruction, we started the run first as our warmup as a group and then the PAX were off.  Here are our total numbers of reps completed (for PAX that were there and those that #fartsacked:

Great effort today men!!  This despite the interruption by the garbage truck and an “accident” that it caused, as well as a lengthy discussion on road closures and such.

As much as this Spano workout gave YHC flashbacks from last year’s Iron Pax, I’m glad we did this one.  It was a hard workout that we got to share as a region and nice way for Foxhole to throw down the gauntlet for future AOs to up their game.

These workouts are going to push and challenge men in new and interesting ways I’m sure.

We are about a week into 2020 now and it’s great to see so many #MenOfDepot kicking the year and the decade off on the right foot.  I always like this time of year because (even though it’s really just a date) it’s a nice opportunity to hit the reset button and start off the year by getting rid of old habits weighing us down and starting new ones that will get us where we want to go.

I’ve been reading through a fantastic book by James Clear called “Atomic Habits”.  Clear is a former college athlete and a performance coach.   His book addresses (among many other things) how we form habits, how to break bad habits, and how to set up processes that will allow you to create an environment to establish good habits.   If you are like me and want to replace some bad habits with good ones this year, check it out for sure.  I highly recommend!

In that vein, today’s devo from Cathy Morenzie at Youversion is about habits:

“Why is it despite our deep desires….we continue to cling so tenaciously to patterns that don’t serve us?  Truth is, most of our patterns are unconscious.  We’ve held onto them so long we don’t even realize that they keep us stuck.  To finally be free of the things that hold us back, we must first identify our defeating patterns, behaviors, thoughts, and choices and turn them over to God.  These “dream-robbers” keep us from living the life we were born to live.”

Even Paul struggled with this saying in Romans 7, “I do not understand what I do.  For what I want to do I do not do, but what I hate I do.”

So what is a PAX to do?  Firstly, I’d suggest identifying what it is you want to change, writing it down, and really considering why it is you want to change that thing.  Very importantly, recognize that whatever it is you want to change isn’t some innate flaw or character trait.  It is simply something conditioned through repetitive behavior that can be replaced by something positive if you choose to do so.  Once you’ve identified it, come up with a process to take baby steps toward implementing and automating the new habit (Clear’s book lays out step by step how to do this).  Track your progress and share your goals with others to help them hold you accountable for it.  We’re all in this together, after all.  Happy to chat with anyone about what has worked for me and the things I continue to struggle with if it’s helpful.  Just reach out.

Ok, time for some TClaps!

Major, Major TClaps to TNT for making it out into the gloom today and more importantly for the sacrifice he and his family have made the last 9 months as he’s been deployed in the Middle East.  We are so glad to have him back and grateful to have him as part of F3.  Mumblechatter was significantly higher having him out there as he shared stories of popping over to Syria for dinner one day, the joys of partial root canals in the desert, and some other sundry tales best left in the gloom.  Welcome Home Brother, we have missed you!

TClaps to Pothole in particular, dude is just on a tear as we get into 2020.  9 days in and he’s either done an F3 workout or his own thing each day, quite the streak!

CHIPPY THE BLOCK – MAY HE REST IN PEACE

Where he came from, we will never know for sure.  Forged in flame and built to endure, he led a hard, hard life.  He spent many a day out in the cold, the rain, the mud, the darkness.  Many men did he help get stronger, harder, faster, and better, while he himself was lifted up, thrown down, marked, and then kidnapped by the enemy.

There he laid for a long while……but yet, through it all he never complained and he never gave up hope.  Secretly tweeting when his captors were away he ignited a spark that led to a movement to free him.  Negotiations were done, pull up bars built, destroyed, and built again, and even further treason conducted against his cousins.

In the end; however, like the phoenix who rises from the ashes reforged, he returned home stronger than ever. Hopeful for all that lay before him and his family.  Hopeful for a new life and a new decade full of laughter, joy, and promise.

But it was not meant to be……

Cause of death….blunt force trauma caused by a fall from a gruesome height.  Paramedics arrived at the scene shortly after, but were unable to revive him…there was just too much pink paint lost.

A full investigation is being conducted into this tragedy.  Luckily security cameras (installed by Pothole to critique PAX’ form when he’s not there) captured this man leaving the scene of the “accident”. 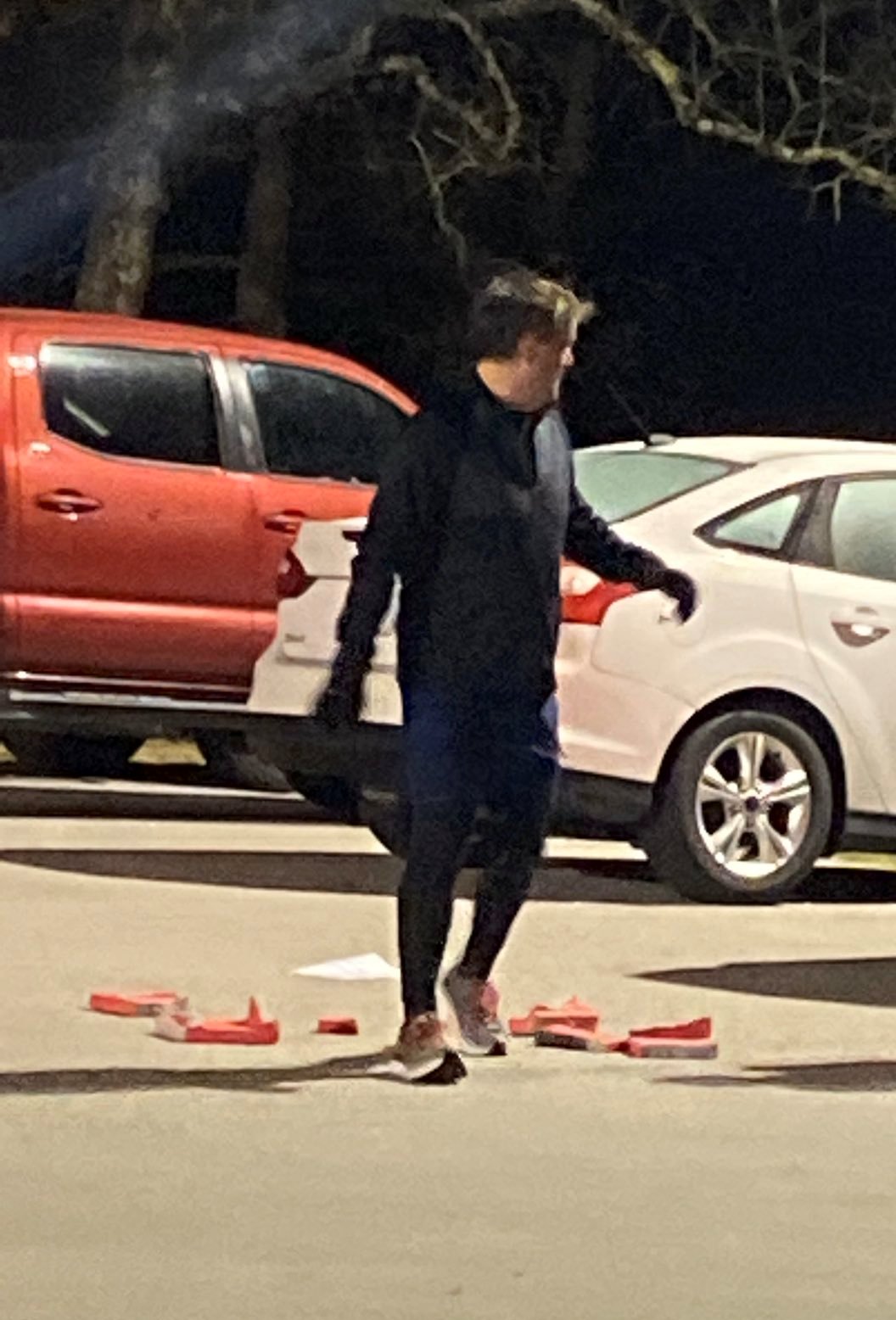 While he looks somewhat familiar, he’s certainly not a Depot regular so we cannot be sure who he is.  Anyone with information about this PAX is asked to reach out to the authorities immediately.

A memorial ceremony was held following the Q, with Stagecoach leading us in prayer…. 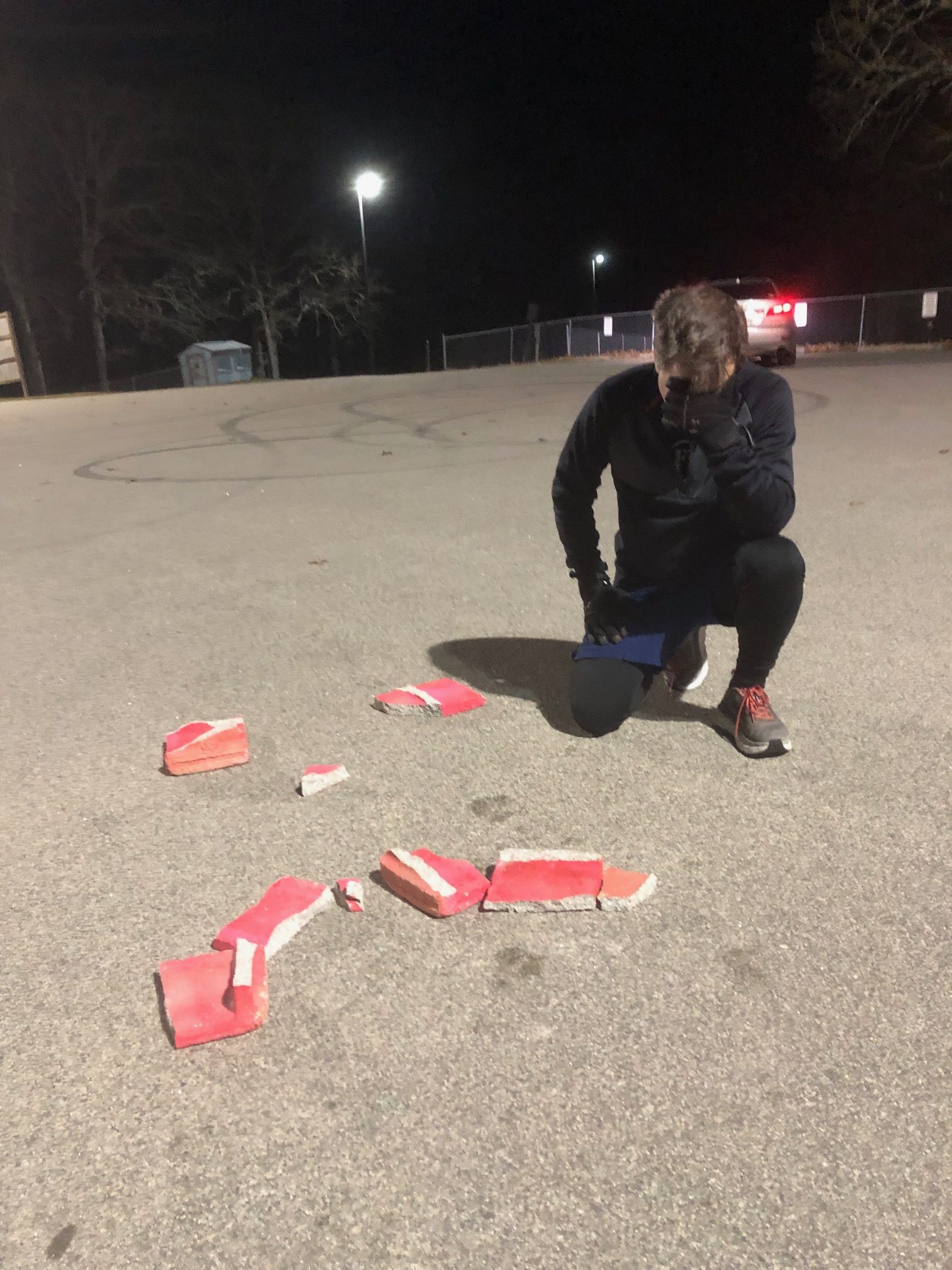 In the meantime, keep the #MenOfDepot in your prayers and be happy for Chippy as he’s now in a better place.

I think his last tweet, sent from beyond the grave (which proves there is Twitter in heaven) sums it up the best…. 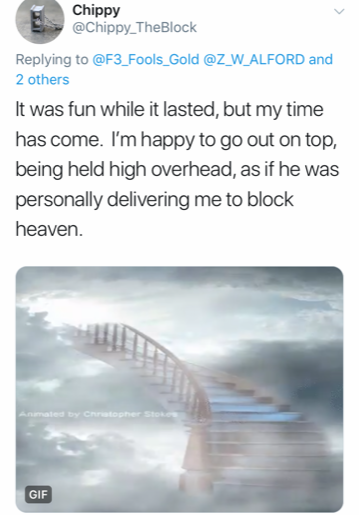 Reminder here, if you want to accelerate your 2nd and 3rd F, make sure to give the new 2nd F @F3Locktite and 3rd F @F3TwoTil twitter handles a follow for information on news and events.

F3 Legacy – normally meets every Tuesday at Depot at 5 AM, but we are putting it on pause until after Easter.  Follow @F3Legacy for details.

3/14/20 – Alternate date for the assault on Sassafras Mountain backpacking trip.  Follow @f3locktite to stay in the loop on this and other items.

2020 F3 Lake Murray 150 Challenge is Ongoing! – We are just getting started on this for 2020, so now’s the time to follow @F3LM150 and tweet your weekly number of posts to @F3LM150 each Saturday to join in on the fun.  This is a great way to get some accountability from your brothers and get in the habit of recording your posts (what gets measured gets managed, after all).

Here’s our Depot Q sheet for the balance of January.

Rumor has it the first Q of the year counts as “double” on the Depot Q sheet tracker, get your Q’s in now!

We’ve got a lot of PAX out on the IR right now.  Prayers for recovery and comfort and a speedy return to the gloom for JDee, Milkman, Speedo, Lumbergh, and Soft…..Toss.

Prayers for those Chippy left behind (especially Moose).

Prayers for all of us to make 2020 the year we leave behind whatever is holding us back and implement the new processes and habits that will get us where we want to go.

Block homicide excluded, the return of TNT and Stagecoach was a blessing today.  It’s good to have both of those PAX out in the gloom and the change in mumblechatter and fun was noticeable.  If PAX didn’t reach out and EH those guys, they likely would not have been there.  Prayers that we reach out to others to get them back into the gloom or out  into the gloom for the first time.

1 thought on “It’s so hard to say goodbye”