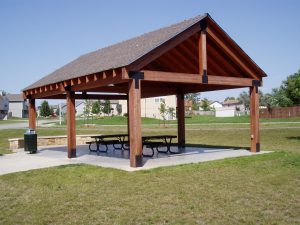 Weather: 74 and light rain. Heavy rain just before “Go Time” and then the rain let up until the end of boot camp. YHC promised to keep any pax dry who showed up in the morning due to the rain forecast and so we got some work in under the covered shelter over the picnic tables near the brick pile.

Mosey to brick pile to get one block and 2 bricks. The weather was a little “iffy” so we headed to covered picnic table area just to be on the safe side because YHC did not want to hear Wapner complaining all morning. Complaints stayed more focused on YHC’s music selection, which was good but apparently did not please the masses although YHC cannot help it if those have poor taste in good quality tunes.

4th SET USING BRICKS
1. SHOULDER SHRUGS
2. RAISING ARMS TO 90 DEGREES, PALMS FACING EACH OTHER, THEN RETURNING
3. STARTING FROM A FULL SHOULDER FLEXED POSITION WITH PALMS UP AND THEN COMING DOWN IN A SCAPTION BASED PLANE TO 90 DEGREES AND THEN BACK UP AGAIN

Due to time constraints, the pax were only able to get through the 3rd set of exercises on the second round.

Return blocks and bricks to brick pile. Mosey to shovel flag for COT.

Be present for Tuesday July 14th at Turning Point! Big announcement!
Treadmill’s return on Thursday for Q and Little Giants has the Q for Saturday.

Sunday Driver’s grandmother has transitioned to hospice
Whiffle Ball friend Jim in the hospital with covid, and another friend Jamie is recovering from it. Prayers for both for quick healing.

When entering the world, Jesus chose a pretty inauspicious family line. If purity was His main concern, He wouldn’t have entered into a lineage with such shady characters as:

Jacob: Habitual schemer
Judah: Collaborated with his brothers to sell the youngest sibling into slavery
Rahab: A prostitute
David: Had a man killed to cover up an adulterous affair
Solomon: Married 700 women and turned his heart away from the Lord
Rehoboam: “Did evil because he had not set his heart on seeking the Lord” (2 Chron. 12:14)
Abijah: “Committed all the sins his father had done before him” (1 Kings 15:3)

You can pick your friends, but you cannot pick your family. Don’t let any family members who have a negative reputation dissuade you from doing the right thing and making your own positive legacy. No man is linked to their family’s heritage and legacy permanently if they aspire to be different.