14 total PAX came out this morning and did several great things. About 540 to be exact. But showing up when others didn’t and putting focus on form were the greatest accomplishments.

Conditions: 74 degrees, partly cloudy, 3mph wind out of the SW.

Tha Thang:
Refer to the image below. It says it all. If you finish this in 15 minutes, congratulations, you did 0 reps. If you did everything correctly and still had time left over, pick any of the sets you just did, and do them again. 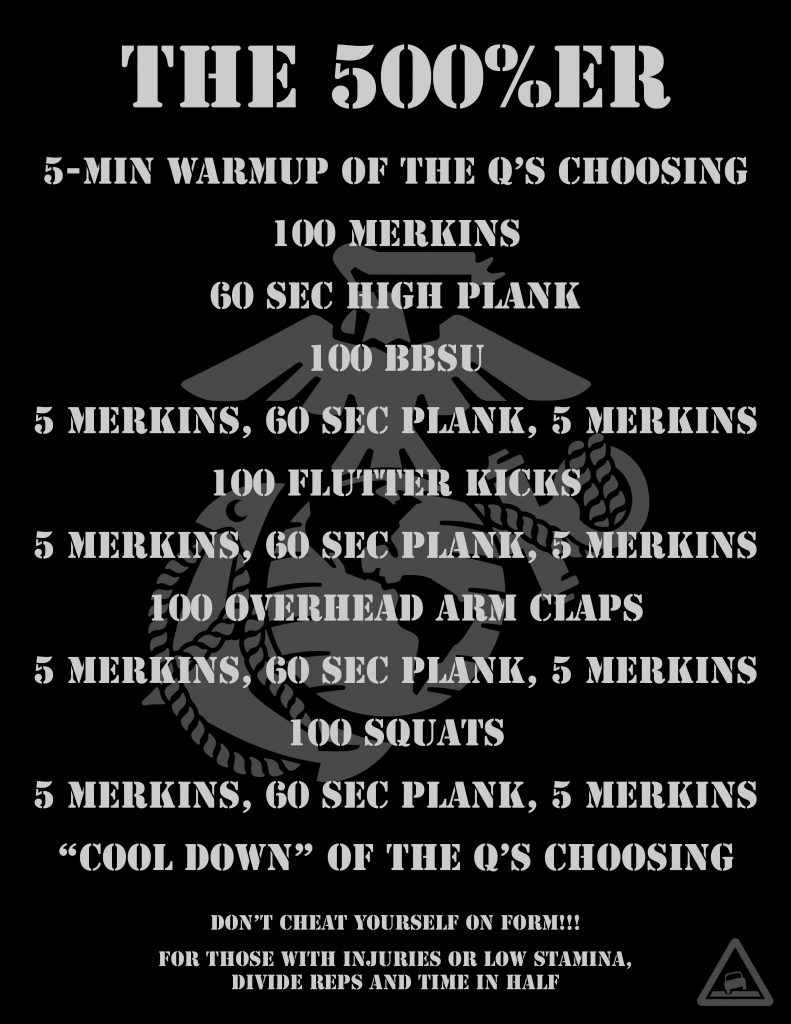 With roughly 5 minutes to go, stop everyone and recover for the noted “cool down”. Just because the workout is over, doesn’t mean I took mercy on anyone. We took the last 5 minutes for THE most intense “cool down” ever. It was all inspired by the boys in blue. No, not the City Police – the United States Air Force.

Announcements:
– Our fearless, one-eyed AOQ, Fools Gold, is planning a trek up Mt. Mitchell.
– Our resident wordsmith, lawyer extraordinaire, and fellow rucker, Bell Hop is planning a great workout Saturday at 0630. Meet at the pool at Lake Port.

Prayers:
– Lots of crazy stuff going on in our great nation right now. Pick someone – they probably need a prayer.
– Several injuries reported due to golf carting accidents. Keep families in your thoughts and yell at your kids if you see them driving your golf cart.

Molesskin:
A potential new entry into the lexicon has been born – Q Wench
We’ll use “wench” instead of the suggested word, for PC sake. What is a Q Wench? Allow me to explain how this was born.

I rode with my neighbor to the workout. Naturally, I left my phone in his truck. When it was time to record the counts and name’s, I asked if he would grab my phone since his truck was locked. As he ran to retrieve my phone, a PAX lovingly called out to him, “So what, you’re the Q’s b***h now?” And so after some thought, Q Wench is now the official name of someone that retrieves items at the Q’s request.