Leading Thunder has been one of the greatest opportunities I’ve had in life. This is such a unique group that pushed me every day of the 16 months I was AOQ. I received constant support from SubPrime, McLovin, Paperboy, and Beads as the former AOQs throughout my time.I was nervous taking on Thunder and wanted to do these men that I look up to, proud. I’d be remiss to forget to mention the constant shit-talk from Beta, Spanky, Boris, Robber, and other along the way which kept me laughing the whole time. According to Robber, when I took over the AOQ role, I was a 19 year old kid from Puerto Rico. I’m now a 30 year old dad-to-be who is so thankful for the last 11 years as AOQ. We did a lot of great things these last 16 months, but the friendships and lessons I’ll take with me beyond this role will last a lifetime.

I feel like Thunder is in a good place as well as bootcamps in general. We have seen a new energy around bootcamps due in part to the #greatestrivalyinsports and can’t wait to see where we go from here. MudDog is going to great things for this AO as well as F3 Columbia in general.

#Respect to the Hammer pax for showing up and supporting this morning (even though it was a last ditch effort to avoid going down +70 on the year). Regardless, we will put the rivalry aside and pick back up next week.

Although it was very tough to give up the shovel flag this morning, I’m most excited about the car being clean again. First stop on my AOQ retirement tour was to the carwash. I’ll be back on two wheels for bootcamps to keep my baby clean. 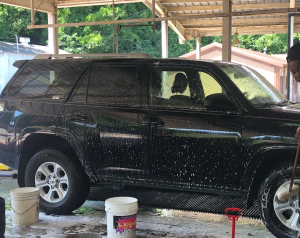 Thanks to all that posted this morning. It meant a lot to me!