6 pax beat the fartsack to post at Tread for the usual walk with some kettle bells.

The pax rucked the usual route to Publix and back, even though a few stragglers caused a later start than anticipated.  Quisenberry was quick to point out the time and YHC asked for forgiveness for using a few extra of the pax minutes for gumby.

YHC called most of the greatest hits of Tread with Garth Brooks playing in the background.

Beginner level Gumby was performed to some soft yoga music.

YHC has been honored to lead the pax of Tread as AOQ over the last 18 months.  As YHC told the pax present, YHC never thought posting on Sunday would be a thing for me.  Tread and later Forge changed that.  They are a great way to get Sunday started off on the right foot.  YHC chose to pass the shovel flag to a pax who has been dedicated to Tread and has shown all of the characteristics of a great leader.  As of today, Little Giants takes the helm at Tread.  Congratulations!

YHC read a quick devo from Kingdom Man by Tony Evans.  The bottom line is to always give God your best, not your leftovers.  The devo quotes Malachi 1: 6-9.  YHC encourages you to take a few minutes to read the verses. 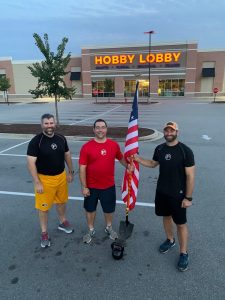