Lower 70’s temperature, high humidity, but crystal clear South Carolina summer morning skies.  A faint hint of Coppertone (the man and the sun cream) in the air, cut through only by the anticipation of the PAX for the Hostel beatdown they paid their hard earned money for.

Hostel’s work (traveling male gigolo…..attorney…..something) has him often on the road, you see, so it’s always a real nice surprise to have him at Q. 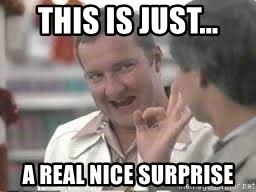 Yesterday, YHC reached out to Hostel, to confirm he had all of the polyhedral dice and Magic: The Gathering cards he needed for his upcoming Q.  Turns out he didn’t even plan to incorporate those into the Q (I know….I mean, WTF?  I’m just as surprised as you are, dear reader)…..

…., BUT, and more importantly, Hostel was to be in Vegas this week (gigolo convention, YHC suspects….maybe vacation….something) and wouldn’t be able to do his Q.

This left YHC in a perilous position…..he could step up and take the Q in Hostel’s stead (be the hero), make others aware and give someone else the opportunity to step up and Q (allow someone else to be the hero and become the PAX they were meant to be….fat chance), or do nothing and just see what sort of dumpster fire erupted at Depot with no Q (TBD).

Option’s A and C seemed like the best fit, especially with Depot Bot’s new Depot Q leaderboard and YHC nipping at Moose’s heels on number of Q’s this year.

YHC did; however, decide to keep up with the ruse until 0530, when Hostel was a no show, YHC magnanimously stepped in to selflessly lead the PAX today.

So before we begin…..

After some awkward moments about Hostel’s whereabouts and a quick disclaimer, we jumped into the Warm Up

The PAX were instructed by semi-twitterless Hostel, via YHC on Twitter, to bring head lamps for some off-campus action this morning.  I’m not sure who popularized this occasional adventure we do to the elementary school across the street (I will give credit to Boxwine, as he’s the first one to do it since YHC joined F3 2+years ago), but it is a nice change of scenery and something a little “different”.  In the spirit of doing something a little “different”, YHC instructed the PAX that we’d be taking blocks with us on our adventure.

Each PAX grabbed a block, donned their head lamps, and we proceeded to Cusack the blocks as a group down the second entrance and to the top of the hill near the main road.  Instructions were as follows:

This went well, but it seemed as if YHC missed giving the instruction that actually 2 groups should be formed.  After a few sessions of planking, the peloton was instructed to wait and the 2 groups again became one.

We regrouped at the top of the hill, powered on our lights, and toted (or toked, depending on the PAX) our blocks to the school entrance.

Next phase of the Q was similar to the first, except instead of Cusacking, we would do walking Curls for the Girls.  Once smoked, we’d plank for a 10 count and continue to the middle portion of the parking lot.  Number of curls ranged from approximately 80 to >1000, lost count.

Drop blocks and 5 Merkins for the hell of it, before heading to the small northern parking lot at the school for a brief story time.

In celebration of Lumbergh’s (present) recent 3 year anniversary and Neck Brace’s (not present, perhaps in Vegas with Hostel) recent 6 year anniversary, we would do 9 sets of a “new” exercise that YHC hadn’t seen before @f3depot.

The exercise would be……….

Damn spellcheck, I mean, HURPEES!!  A Hurpee is a Burpee, with a Hand Release Merkin instead of a standard Merkin.

The PAX were also given a choice, to do a Hurpee Ladder with sprints across the parking lot doing with reps of 9, 8, 7, etc.  down to zero OR to do only the odd Hurpee reps (9, 7, 5 etc.) and Bear Crawl instead of sprinting.

Only Moose took the Bear Crawl bait, while the rest of us did the sprints.  Turns out Moose, being good at cyphering and maths, did a quick calculation of mass, time, and energy and figured out the Bear Crawl would be less work so he finished well ahead of the rest of us. Could just be the Moose is a #Specimen, however, right Bro Si???

After 10 minutes of this, YHC called time.  TClaps to Moose, EZ, and Coppertone for finishing the Hurpee Ladder!

We returned to our blocks and did the last exercise that YHC pulled from our friends at the Exicon, officially titled the “Joe Hendricks”.  This exercise is a backwards Bear Crawl up a hill.

Being Depot, we modified this a bit and backwards Bear Crawled across the parking lot and over the curb (warm up), before starting up the hill to the school sign.  It was a hard exercise that had YHC sucking wind throughout.  TClaps to the PAX for encouraging YHC to make it as he nearly forgot the old adage “Don’t do it if you can’t Q it.”.

Out of time, we grabbed our blocks and moseyed back to Depot for some rapid fire block exercises to finish it out:

See Foreskin above and Devo below, but also…

Thanks to Hostel for the opportunity to Q, safe travels brother!

Thanks to the 12 PAX who showed up today and tried a few different things and worked their tails off, while encouraging me to do the same.

The F3 Exicon is your friend.  It can be found by googling or here:  F3 Exicon

Thursday 8/8/19 Moose is back on Q at Depot.  Let’s get some numbers out here to support our resident #Nuckle, it will be a good time.

The Mission Summer Cookout is around the corner on Friday, August 9th!  Contact Stones for more details, but let’s have a good showing from Depot at this thing.  A link to the sign up sheet is here.  OGM Cookout Sign Up Sheet

Strut – 6 Year Anniversary Convergence! – Saturday August 10th.  This will be a great convergence with our other Lake Murray brothers at Strut.  Strut meets at 7 Oaks Park in Irmo.  Let’s make sure Depot has the most number of PAX at this event.  NOTE THIS IS AT 0615 AM THIS SATURDAY!

August Depot Post Challenge – Neck Brace challenged us to each get 15 posts in August, let’s get er done men.

F3 Dad’s camp – The event is Friday, August 16th through Sunday, August 18th.  It is sold out; however, cancellations are possible.  Thin Mint of F3 in the Charlotte area is coordinating this, reach out to him if you want in and there just may be a few tickets out there available.

Follow @f3dadscamp for details or see the pre-blast aqui:

F3 Iron PAX – This is an event put on by F3 Greenwood.  It is a competition to see which PAX in the F3 Nation is the Iron PAX.  Winner will get to face off in a 60 minute duel with Bobby Flay…..the secret ingredient is…..rutabaga.

The event is more than an individual event.  It’s also a region vs region competition and the more PAX you have the higher the potential score for the region.   This kicks off in September, but sign up is ongoing.  As of right now, I’m aware of a few Lake Murray PAX that have signed up (Pothole, Devito, Moose, YHC, Lap Dog, Clarice, and Butterbean), and we need more.  Information at the link below:

The Q lineup for August at Depot is a great one, but there are still a few open spots, let’s fill them up men!

Link below if you have misplaced it:

Prayers for the many PAX who continue to be on vacation as the summer winds up soon.

Prayers that our numbers continue to grow and we can reach more and more PAX that need this F3 thing in their lives.

Our brothers struggling with whatever challenges life is handing them right now.

Today’s devo was the last one in a series on the Youversion app called FCA: The Relentless Devotional for Competitors.  It is a great Devo plan today’s was by Dan Britton called “My Top 10”:

READY:
“I always thank God for you because of his grace given you in Christ Jesus.” – 1 Corinthians 1:4

SET:
I love ESPN’s Top 10 Plays of the day. Did you know that God created the original Top 10 list? It’s called the Ten Commandments.

I decided to create my own list and focus on people who have invested in me so that I can improve, grow, learn and get stretched. As I considered what changes had taken place in my life, I realized it took a host of other people investing in me and influencing me along the way. These people had encouraged, educated and inspired me to grow in my walk with Christ and become more than I imagined! What a blessing it will be for them and for me when I tell them how they changed my life.

Through this process, I also was able to evaluate my own life and ask myself if I had lived in such a way as to make the Top 10 list of others. Had I been intentional about investing in others in a significant way? Was I doing everything I could to be a blessing to them?

As athletes and coaches, we have great capacity to impact and influence others. It’s time to aim for being a Top 10 in someone’s life. God placed us here to make a difference in the lives of others. Go and be used by God to be a difference-maker, and thank those who have invested in you!

GO:
Create Space: Spend some time praying and thinking and ask the Lord to bring people to your mind who have impacted you.
Grab a Pen: Write out a Top 10 list of your own, but don’t worry about ranking them.
Shout Out: Bless the people you listed and give them a shout out. Call or e-mail them and let them know that they made the list and why!

Speaking personally, there are a lot of folks who have helped, and continue to help, me on this journey on the Big Blue Ball.  I like the call to action in this Devo to spend some time connecting the dots reflecting on your life and those key people who have helped you become the person you are today.

Often we get so mired in the trappings of life, that we don’t take time to think about much of anything, let alone those who have supported us through the years.  I am guilty of this for sure.  The bigger step here (sort of like bear crawling backwards up a hill) is to not only identify those folks, but to reach out to them and let them know how they have impacted your life in positive ways.  Both you and they will be glad you did.  Let’s commit to doing this.

We should never be too busy to acknowledge life’s blessings.  #ShoehornGIFSegue