They call them Completely Stupid and Utterly Pointless (CSAUP).  The first part I can agree on but rarely are they utterly pointless.  The point is to get better: to prepare,  embrace the suck, share the pain, learn some lessons, and then share the lessons.  Hence my first After Action Report.  I hope this will help anyone considering a GORUCK (or two) to take the next step.  Signing up isn’t the hardest part, but it is the most important.

I started training in early September, toting a 40# DIY Bulgarian Training Bag (the dead baby seal) in addition to my 34# ruck during F3 Wander distance rucking group.  Any more than 5 minutes at a time was difficult to start (thanks to all the brothers who helped pass it around).  I added 5 minutes a week, up to about 30 minutes before getting uncomfortable.  Then you just get used to being uncomfortable for that last 15 minutes.  I was able to handle a full hour, about 3 miles, by the time of the event.  When preparing for a Tough, go ahead and get used to being under your ruck + 40# for about 30 minutes at a time.  In the case of this Tough, it ended up being a few hours at a time.

I signed up for the Pathfinder Endure ruck training program, but unfortunately a whole bunch of life happened and I didn’t get near the miles or special events that I should have.  I’ll give it another go before the next event and highly encourage anyone considering a GORUCK to do the same.

Gear & Supplies: 26L Rucker w/ standard packing list stuff, T-Shirt, Under Armor tactical pants (third Tough with these – very durable – recommend).  Snagged a Lexington HS Basketball packable windbreaker for $5 at Goodwill.  Was planning on worn out jogging shoes but ran across the Merrell Moab Edge on sale at Sportsmans Warehouse on the way out of town, which proved to be a sound investment.

The Cadre: Nick. Navy Special Amphibious Reconnaissance Corpsman (SARC). Solid guy and a ton of fun.  He did a great job of determining our “limits;” and then stretching them over each movement and evolution.  Glad to have gotten to know him and hope to see him again out there. 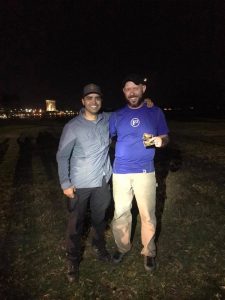 The Tough: AAR Map with Notes

The Coupons: Two logs (6′ long and about 120# each), the chain (12′ long, also about 100# if I had to guess), 25# medicine ball, litter (fold-up stretcher), a bag of empty sandbags (thank God they stayed that way), cones (ended up in the empty sandbag), 25# ammo can (team weight), F3 GRIT Shovelflag.  Arranged in a (eventually) perfect smiley face at the end of each evolution.  Cadre informed us at the STARTEX that attention to detail would be most important aspect of the night’s event.  We took a few hits for missing the Standard.  Lesson Learned:  When receiving tons of information, break it down and assign small pieces of info across the team.  Don’t just assume you’ll collectively figure it out when the time comes cause you won’t and you’ll lunge/bearcrawl/partner-carry for half a mile.  Remember your part and someone else’s and know that your battle buddies have your back. 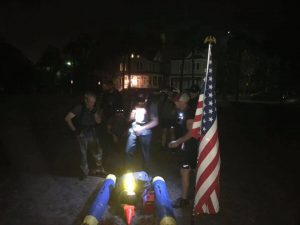 The Rundown: See layout and landmarks in the AAR Map linked above.  “Tough” is not just a clever name.  14 signed up, 10 showed up, and 9 began the event post-Admin.  We started with a roll in the Ashley River marl until completely soaked, which added about 5-10# of water stuck in the ruck (lesson learned: add drain hole grommets).  There are 9 coupons listed above, which actually made for about 10 carrying positions (two men on each log and eventually two men on the chain), so we were all under weight all night (except the Standard-bearer).  Varying degrees of discomfort.  We got smarter with each evolution; and “earned” the litter at the end of Movement #3.  While the litter helped spread the load, there’s still just as much crap to carry so you’re just burning a different muscle group.  Lesson learned: self-and team improvement is an ongoing and never-ending process.

It was a chilly drizzle all night with a good rain around midnight.  Never know what you’ll get in November in the south but we were fortunate with mid-50’s.  The Ashley River and Shem Creek were cold; the latter being a little more refreshing but still pretty nasty.  Perfect weather for good livin.

A mysterious wobbly figure emerged from the trees at the end of Movement #2, White Point Garden.  He was very interested/concerned with who would be carrying the flag.  Belligerently; although benevolently intoxicated, he kept stride with us through Movement #3, shouting encouragements and slurred profanities.  He was one of the guys by the end of the 5-mile hump and then wandered off again as we headed for the Ravenel Bridge.

We had a seat to share our Veterans cards at the top of the Ravenel Bridge, which was awesome and well-timed on account of carrying all that crap up the hill.  There were some real sentiments and feelings shared.  This was the “why” for many of us.  You never really know what time it is – we figured around 0300.  The decline was more bearable; although we couldn’t help but worry how we were going to get ourselves and the coupons back over the bridge to the STARTEX.  The lesson learned: worry about later later.

Movement #5 ended at Mount Pleasant Memorial Park and we got to shoot the breeze for a while.  Have some snacks.  That’s when I heard the most beautiful sound: the birds chirping.  The end is near (or more near than it was on the way up the bridge).

We missed every one of our time hacks (except the one that counted – the last one).  While they were all reasonable, each evolution had its challenges.  Mostly traffic lights; a few coupon drops and one slip/fall and generally dragging ASS by the end of it.  But the Standard is the Standard – Cadre Nick was fair and just, and the Standard never slid backward.  The most painful miss was the one that we beat by 2 minutes – except we were at the wrong location.  Lesson learned: Share information.  Cadre gives direction only to the Team Lead for that evolution.  It’s TL’s job to get the team there in time.  Once direction is received, TL needs to share the destination/directions – in every detail – with everyone on the team.  Cause there’s a good chance that a slight detail will slip your mind and you will Blue Falcon your crew. 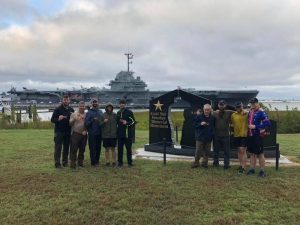 Cadre Nick knew we were pretty well spent as we hauled ass to make (miss) the next-to-last timehack.  We were given the opportunity for redemption (and then some).  The objective was simple: Run (not ruck) down to the guard house and back in what seemed like a reasonable timeframe.   The stakes: we didn’t know at the time but were told, “you don’t want to miss this one.”   We nailed it.  The reward: cold Bud Lights and GORUCK Veterans Day Tough patches.  Oh yeah, and Cadre Nick had an Uber on the way and would return with his pickup truck (and McGriddles) to haul the coupons to STARTEX – and also take back 3 team members to return with their vehicles… as long as we were in the forward-leaning rest when his truck pulled up. 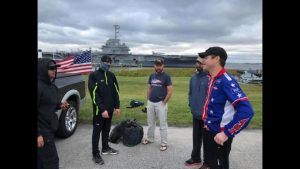 There was another plus: Admit-Ones for Patriot’s Point!  Very thoughtful of the Cadre to round out a Veterans Day event aboard an aircraft carrier. 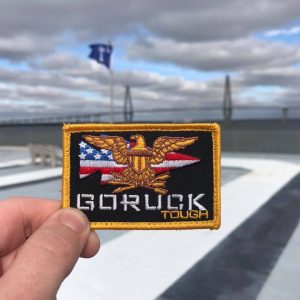 The Space Between:  Finished the USS Yorktown walkabout around 1000 and we were pretty much starving.  So we rolled over to Lewis Barbecue for an early lunch.  That was amazing.  I stuffed my face and crawled back to Trav’s truck for a nap before the Light at 1400.  Woke up around 1300 in the hotel parking lot.  Ran in to change into dry round-two clothes and headed back to Brittlebank Park.

Felt pretty crappy, mostly on account of the 4 cold beers at 0800 so I probably won’t do that next time.  But the rust flaked off after the initial admin and the Light was a whole lot of fun.

The Light: AAR Map with Notes

Rolled up with two minutes to spare and three minutes of preparation needed.  Jumped into formation missing cash, ID and veteran’s card but Cadre lemme hustle to the glove box.  Weather was absolutely perfect.  60 degrees and sunny.  We had 11 participants (myself and two others being the T+L’s) and one less log, which meant a little more rest while on the move.  We also had a shadow (Pierce), which helped.  It was a win/win: the T+L’s brought the tips and tricks, and the new folks brought fresh arms, backs, and legs. 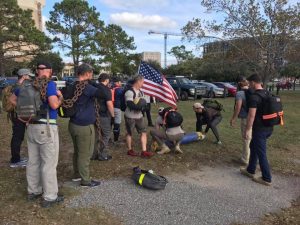 We employed each of the lessons learned during the Tough and really made “Light” work of it.  Nailed most of the time hacks, even moving at a 14min/mile clip for one of them.  Pretty much log-jogging.  Fountains were fun/awesome. 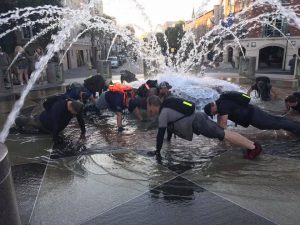 It was a long Light at 6 hrs and 9+ miles.  There was the possibility of another dunk in the Ashley at the ENDEX, but fortunately the tide was still out and Cadre Nick didn’t want to send us home caked in fish turds.  Highlight of the event was the Battery sunset, and the peace of knowing that we were on the home stretch: 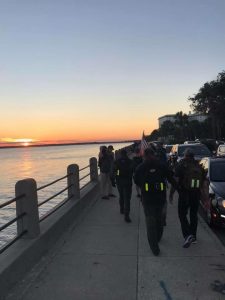 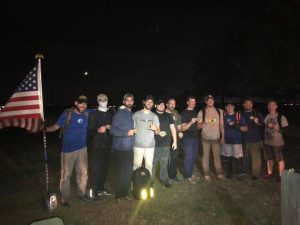 The Veterans:  We owe it all to our vets.  Here are a few we honored during the event:

PFC Kristofor Stonesifer: I didn’t get a pic of his event card, but here’s a link to his Bio.  He’s a cousin of my brother-in-law.  Amazing individual –  avid adventurer, enjoyed writing, blogs linked with Bio.  His life has, and will continue to impact many.  KIA Pakistan, 10/20/2001. 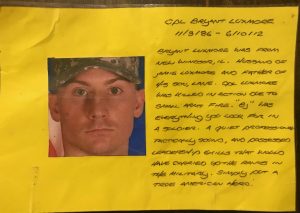 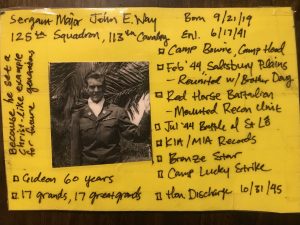 1LT William Scott Turbeville:  My brother-in-law, pictured with his sister (my wife) below.  Recently re-enlisted with National Guard. We love you, Scott.  You make us eternally proud: 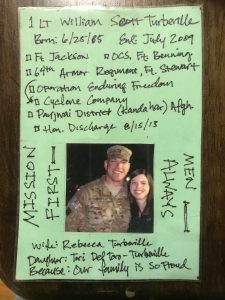 Banjo out!  Thanks for reading and happy rucking. 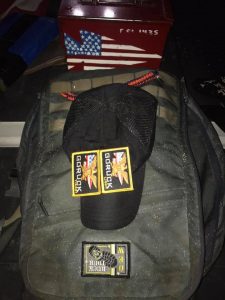