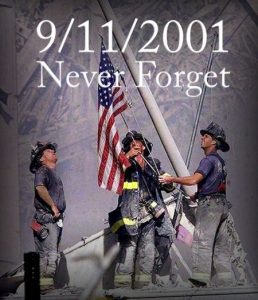 Moreover, today we remember 9/11/2001 and all the families affected by the terrorist attack that took place 17 years ago. Many courageous first responders headed into the burning towers that day, never to return home to their families. We remember the men and women of Flight 93 that confronted danger head on. We remember the men and women at the Pentagon as they fought to rescue their fellow countrymen out of the destruction. We remember the rescuers that worked tirelessly in the rubble of the fallen towers for months on end as they selflessly sacrificed their health and safety. We will remember and continue to pray for the men and women in our armed forces that are stationed throughout the world as they serve our country. We will remember the fallen for their sacrifice that day and their families as they continue to overcome the grief and sorrow that results from the loss of a loved one. WE WILL NEVER FORGET!

Put up blocks and mosey to Shovel Flag

Great effort by all (and even better mumblechatter)

Devo: Today’s devo focused on how we can help other men persevere through adversity by being faithful friends. Being among loving & faithful friends can ease the burdens we carry in life and help lead us back to God. “Behold, how good and how pleasant it is for brothers to dwell together in unity!” -Psalm 133:1

Cure for Worry on a Morning Run (from Guideposts.org)

When you can’t get out of your head, get with loving friends that will lead you back to God.

I headed out to the park for my morning run. I had such a passel of worries somersaulting through my brain that I could hardly take in the sun rising behind the clouds, flushing the sky with pink, nor the daffodils opening up in brave yellow flanks on the hillside. Not for nothing did Jesus say, “Consider now the lilies.”

I was on my first loop, dreading the hill, my steps slowing, my thoughts stuck on an absurd cycle of looming penury and decrepitude, when I saw a runner in a fluorescent-green jacket coming toward me. Was that Jim? Yes, it was. A history professor and writer, he’s always got something interesting to say.

The next two loops flew by as we discussed the book he was writing, the class he was teaching, how our sons were doing, and just how much easier it was to run uphill with a companion.

“Thanks a lot,” I said as we parted ways. “You were just what I needed.”

“I’ve forgotten already what I was worrying about.”

All the way home my eyes were open to the beauty of the day. Call it endorphins, call it sunshine, I’d say friendship was my boon companion. I recalled something preacher and writer Max Lucado once said: “When you’re really down, when you’re losing faith from excessive worry, get with your loving friends. They’ll lead you back to God.”

Two loops with my pal Jim did just that.

I give thanks, Lord, for the bounce that friends always put in my step. —Rick Hamlin