Conditions:  A warm 76 degrees, unusual for October, but with not too much humidity.

The Thang:
No FNG’s
Disclaimer
Prayer

Warmup: Walk to the bus circle for some warmup exercises. YHC had to swap Q dates due to a conflict, so it was a few days early for a birthday celebration, but that was what was on the Weinke, so we did it anyway… Warmed up with 62 reps of various exercises: 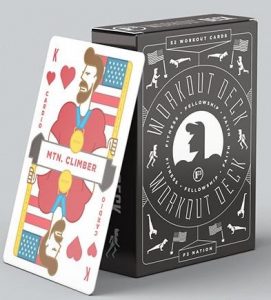 Workout: I’ve had my F3 workout deck of cards for a couple weeks now, so finally had the chance to give them a try. During the stroll to the block pile, there was a little mumblechatter about a “stacked deck” and I did admit that I did pull some cards related to running out of the deck to honor the Boneyard mantra, and I pulled some others as I wasn’t familiar with them and figured I’d probably forget how to do them. So, we grabbed a coupon and I started pulling cards.  The workout consisted of pulling a random card from my pocket. Do AMRP for 62 seconds, then walking with the block for 62 seconds.. then rinse and repeat.  We got through the following 24 cards (in no particular order):