Hammer continued celebrating it’s #Cannonball Run victory with a visit from the Nantan. McLovin requested the presence of the championship trophy, but team captain, Misfire, thought it might be an effort to repossess the hardware and left it secured in his closet, where he admires it while he dresses. 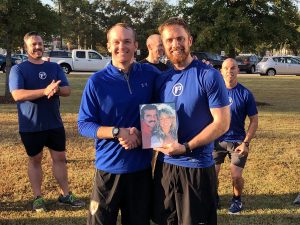 Conditions: Clear and a crisp 43 degrees.

Knuckles only workout commences. YHC picked up a stashed cement block. Pax are instructed how to carry block without using fingers. A warning of dire consequences for all Pax is conveyed by YHC in the event block is dropped and broken.

Mosey to Briarfield and Satchel Ford intersection to line up for Bataan Death March. Pax in lead carries cement block. Pax in rear does 5 Burpos and sprints to front and assumes carry of said block. Covered just under 1 mile and finished up back at the blocks.

Every Pax grabbed a block and moseyed to baseball field for COP.

Knerkin Clock on block x 12. Each Pax does 1 knerkin then rotates feet clockwise. 1 rep for each hour on the dial. Because of the shape of the block, your arm width changes for each rep resulting in varying degrees of pain.

Circle back up.
BBS holding blocks x 25 IC
Knerkin Planks
Starfish right
Starfish left
Alternate raising one arm and one leg
Around the world Knerkin on blocks. 30 total.
Block Curls x 15 IC (YHC observed lots of grunting or could have been whimpering. Not really sure).

Tunnel of Love x 2 rounds (shoulders were on fire by the time we finished this).

Circle back up for 35 Flutter Kicks IC

Mosey to put up blocks.
Had 3 minutes left so finished up with 3, 50 yard sprints.

Announcements:
McLovin asked for Pax to turn out for Mission Cookout on Friday and Palmetto Place on Sunday. Both are great ways for the Pax to give back to those in need of some uplifting and also come away with some truth nuggets as well.

Moleskin: This morning marked the 1 year F3 anniversary for YHC. Major Tclaps to Paladin (F3 Bluffton) for planting the seed, McNugget for the EH, and Duckie for Qing YHCs first post in the gloom. Duckie did an Indian Run during that workout so YHC paid homage to him via the death march. Duckie, the Pax in attendance will be certain to thank you. YHC threw in the tunnel of love in honor of McNugget because it’s his favorite. For some reason he never seems to get as low as the other Pax when going through the tunnel. Tclaps go out as well to the rest of the Hammer and Battle Pax. YHC is a better man because of you. Finally, YHC hesitated on the knuckles only workout this time because we used the blocks instead of the bricks. The Pax crushed the workout despite the added challenge. They left knowing they’d be sore in new places tomorrow, but also knowing that they can conquer anything they face in life. The reason is because of our faith in each other and in Sky-Q. Faith removes limitation. There are no limitations except those that we acknowledge. Aye!