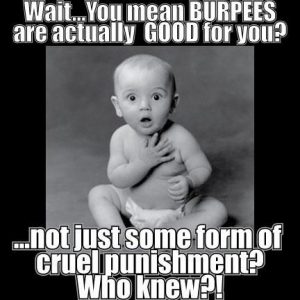 Tha Thang: So, everyone was warned this was YHC’s 5 year anniversary Q, and there may be some back to the future element. For years, I was known for having extremely thematic and interesting Qs, but I got a little burnt out from that. I touched on some old stuff from a Rocky-themed workout, but was relatively sparing on the flashback. That doesn’t mean I was sparing on the workout. They are still hard, and typically more up-tempo. Today was no exception.

Indian Run to Crabby Corner. Grab CMU’s and Cusack to the corner. 10 reps of Bulgarian split squat each leg.

Typewriter Merkins. Around the world on the block. Plank work with inchworm and starfish. Some abs. Deconstructed Superburpees slow IC. with blocks, Side bends. Bent over rows. Dead lifts.

Napalms x 8. Curls for the girls IC. #QisSpent . Blocks up, Indian Run back to basketball court.

Bear crawl mini-suicide. Flutter kicks and Dollys. Burpee suicide with only 2 at each turnaround. Probably some other core (but no Supermans on CMUs, just for TomTom). Mosey back to AO. Finish with pistol squats. Order likely wrong.

Devo: I shared my thoughts about my 5-year anniversary on a tweet earlier, so I won’t rehash here, just see this link.  But, thank you gentlemen, for everything you have done for and meant to me.

Devo: Noahs Ark lessons
1.Don’t miss the boat.
2.Sometimes God destroys in order to save.
3.Plan ahead. God will do what he says. It wasn’t raining when Noah built the ark.
4.Stay physically, spiritually, and mentally fit. When you’re 600 years old someone may ask you to do something really big.
5.When you are following God’s commands, don’t listen to critics who say you’re crazy.
6.Build your future on the high ground of prayer. Let God help you with your biggest responsibilities.
7.Be patient and give God time. Noah didn’t disembark until God told him to – six months after landing on dry ground.
8.The ark was built by amateurs trusting in God. The Titanic was built by professionals trusting in themselves.
9.There needs to be rain in order to see a rainbow.
10.God cares.