***Posted on behalf of Brainiac***

Honeybun was scheduled to Q today, but his M’s surgery was postponed from Friday to Saturday morning, so Brainiac stepped up and volunteered to cover in HB’s absence (speculation was HB was running hallways and carrying patients up the stairs to avoid the workout DT’s).  Brainiac put it out via the twittersphere that they could do the animal or Ultimate.  PAX spoke and ultimate it is. 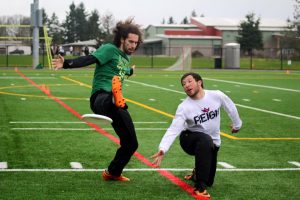 Disclaimer (where’s the one minute warning?)

Brainiac called the first exercise, IC, 10 count, then each pax called and exercise in 10 count except of Riverdance whose highest number is apparently 6.

Count off and divide up into teams, one team of studly good looking pax and one team of the other guys.

It an evenly matched game with team goodlooking scoring first quickly but team other guys reeled of two quick scores to counter.  It was back and forth for a bit until team good looking scored late to tie and time ran out.   We just needed 2 more minutes and the ball.  Overtime was declined as Pax chose coffeteria.

Throw it somewhere near Steamer, he’ll catch it.  Farmer is a stud on D.  Kukoc runs and runs and covers a lot of ground.  Brainiac was surprising athletic a few times, and other times you know why Nebraska is famous for lineman.  There were some really nice long throws and catches, some really nice sequences of throws, and there were quite a few others.  Playing ultimate in the dark with even a lighted frisbee can be challenging.  After a few minutes of playing time, the sprinklers came on and no one really noticed or cared.  By the way, Ebert, that’s a sprinkler, not a bidet.   Good work, men!

6 ‘ft and his family

Emmy’s sister and their family