YHC has been spending his Wednesday evenings at the soccer fields (along with just about every other night too) for his 2.0’s soccer practice. A few weeks ago off in the distance YHC noticed  some young lads playing this game we call Ultimate Frisbee. For the most part these are not F3’ers (except for F3 Onesie who we need to get back out). So last week YHC decided to mosey over and see what this was all about and perhaps jump in for a quick game.  Several of these chaps had UF league shirts on and were clearly 20+ years younger than YHC. After the game YHC invited these younguns to join us on Saturday at GY.  2 of them showed up and showed up big they did.

YHC also brought his 2.2 out since yesterday was his birthday and what he really wanted for his birthday was to play UF with the F3 guys.

We split the 2 pros up b/c their frisbee throwing skills impressive to say the least. Here’s a quick top 10 of what it looked like out there on Saturday.

Teams were divided up and we got down to business. Hopper brought his son out again to show him a few Respect skills but YHC accidentally through a hard flick and caught him in the nose causing blood and all sorts or chaos. Hopper shook it off and kept on fighting. 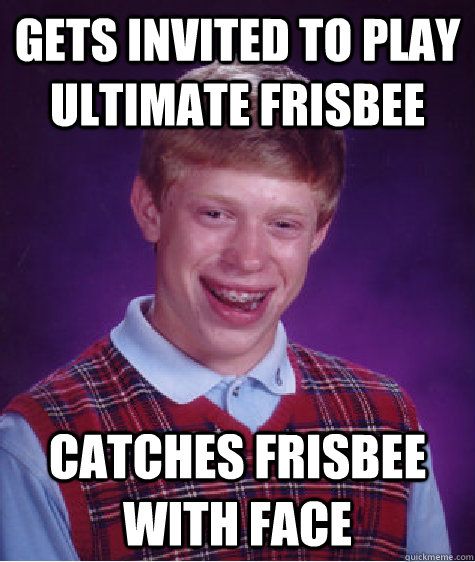 I will say that MVP of the game likely goes to Weekend Special.  Dude had like 6 TD’s. Looked something like this: