Whitney has arrived on scene for the VQ!

0530 – 16 additional Pax greet Whitney and disclaimer is given and we are a go for my VQ!

One of YHC’s favorite shows grown up as a young boy was The Man Show.  In a day and age before PC culture killed crude humor shows and before Jimmy Kimmel turned into a liberal sheep, there were some very funny and entertaining bits.  The show was then continued hosted by Joe Rogan and Doug Stanhope. Certain episodes of the Man show had the Wheel of Destiny skit where audience members were brought down to spin the wheel and accept what fate may come.  Check out some clips for your entertainment if you are not familiar.  Some viewer discretion is advised:

YHC admits the show was funnier and better with Adam Carolla and Jimmy Kimmel as hosts, but could not track down any other clips with Wheel of Destiny with them as hosts, so a couple with Joe and Doug will have to work.

Anyways!…While there were no spaces with “beer for a year” or a “juggy phone booth”, all pax were winners as every space guaranteed that they would get better!  Spaces included 10 SSH, 20 Big Boys, 10 LAC’s, 20 Monkey Humpers, 10 Flutter Kicks, 10 Squat Jumps and 10 Burpees.

The warmup was 4 spins and consisted of monkey humpers, squat jumps, SSH and Big Boys

Pax were then instructed to grab a block and mosey to the soccer fields.

Nerves from it being my VQ and/or brain damage flaring up from my football playing days caused YHC to omit 20 squat presses here, so instead Pax were then instructed to lunge Cusack to the area between the two soccer goals.  Pothole took it upon himself to stop the lunge Cusack at the first soccer goal, which shortened this run but made the next longer.

At this point some Pax were questioning whether or not this was a VQ or if YHC studied workout videos prior to coming.  YHC informed that the workout came from pointers picked up throughout my football career and we continued.

Pax were then instructed to put blocks up and circle back up in the parking lot to finish out with some more Wheel of Gloom with about 10 minutes left.

A couple lands on squat jumps mixed in with some LACs, and it seemed like a great cool down…Until the last spin landed on burpees.

YHC called it a day after the burpees with 2 minutes to spare and Pax circled at the flagpole.

YHC was on a bit of a time crunch at the end due to having to drive up to Boone, so no devotion was given at the flag.

Devotion…sort of – I wanted to share some of my personal story of struggle, motivation and how you can help motivate others!

Most of you are not aware that YHC played D1 football for a period of time at Liberty University.  I was in decent shape for an offensive lineman.  Unfortunately when I quit playing football for my health, I continued to eat like I was still lifting 6 days a week and sweating out 20 lbs a day during practices.  This led to gaining about 60 lbs or so over the course of the next couple years.  When I took a full time job as Security Manager for the Charlotte Bobcats, soon changing to the Hornets, I was approached one day by MJ and his older brother James Jr. with a challenge.  They offered me a gym membership at Charlotte Athletic Club and a personal trainer 5 days a week and wanted me to bust my tail to get healthy.

Let me tell you, when Michael Jordan challenges you to something, it is hard to turn down, so that next day I was in the gym at 8am for my first personal trainer session.

A change in the diet and intense workout regimen led me to lose about 100 pounds in a little over four months. 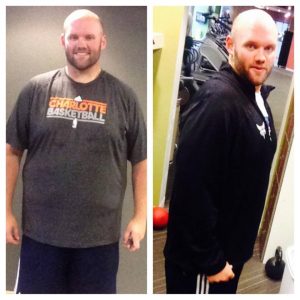 I was in the best shape of my life and felt great!

Two years later, getting married, changing jobs and moving to Columbia where I no longer had the accountability of my personal trainer guiding me caused me to gain about half of that weight back on.  My new job puts me driving on the road quite a bit, and their aren’t very many healthy options available on the go!

After a few Sunday’s at Church where Neckbrace, Box Wine and EZ would mention this F3 workout group it peaked my interest but I would always find reasons not to go – “I have to travel for work”, “It’s too early”, etc…often crept up in my head.  Neckbrace remained consistent and continued to ask me to come until I finally decided to give it a go.  I am thankful to have been introduced to such a great workout group.  And while I still miss out some days due to traveling for work, it has given me motivation to get up and get better and I have started cutting back down the weight that I was putting back on.  I still need to work on my diet some more especially when I am traveling, but it has been great to get into a routine a with workouts a couple days a week mixed in with gym sessions.

TL:DR – Push folks to show up and get better.  Just because you asked once and they didn’t come doesn’t mean they aren’t interested.  Sometimes they need egged on a little more and your persistence could set the stage for a lifestyle change. You never know what they are going through, and they might just need an extra push.

Same can be said in every aspect of life.  You never know what someone may be going through, and your small act of kindness – holding a door open, saying hello – may be all the difference someone needs! 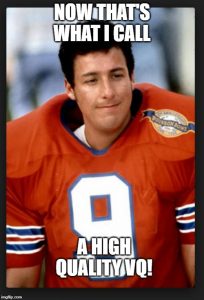