It has been quite some time since our last correspondence, and I pray that you have not been too concerned about my well-being.  Please know that it has not been due to a lack of thought for you.  Honestly, my love, I can scarcely get you out of my mind.  Countless times, while I lay in bed (or whatever I’m calling a bed at the time), I imagine myself with you once again.  I recall with great joy the times we ***REDACTED***, and especially when we would ***REDACTED*** right after we ***REDACTED*** with ***REDACTED***.  To this day, I still have know idea how that was even possible! 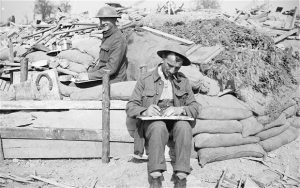 At any rate, my dear, I would love to tell you that my lack of writing has been due to the sheer busyness of war, but, in reality, I have been on rather light duty over these last several months.  It began over the summer with an injury to my hip that I sustained during a resupply convoy.  And, while I am now fully recovered, it has taken some time to get back into a frame of body and mind that would have me ready for battle.  Thankfully, however, the brass finally believed that I was prepared to return to the frontlines with my men, so I was fortunate to be fighting alongside them, once again, this very day on a mission that could have easily been our last.  In fact, I overheard one of the Lieutenants calling it a suicide mission, but, as Lord Alfred Tennyson once wrote, “Theirs is not to question why.  Theirs is but to do and die.”  And so we went out into the field as ordered…

It was a cool, crisp morning and the fog was as thick as butter, which, in hindsight, may have saved our lives.  We began, as always, by preparing ourself for battle.  We were given our orders (the disclaimer) and said a prayer of protection to the Almighty.  After a mosey around the base, we completed a series of 15 side stratal hops, through the tunnels, imperial walkers, and little baby arm circles (front and back).  Upon completion, I felt the men were prepared for the mission that lay ahead, thus we proceeded to the battlefield known as “the Parking Lot.”  As we stood in formation, we gazed out over the horizon to see a dimly lit landing strip (much like the one that sits atop your ***REDACTED***).  After surveying the area, one soldier was sent into the field.  Each time, after reaching a light, he would quickly return to the platoon, give a brief report, and sprint stealthily to the next light in consecutive progression.  While he was out, the rest of the soldiers found themselves engaged with the enemy by doing a series of high planks, low planks, merkins, Al Gores, little baby crunches, etc.  We did this while awaiting our turn at which time we each went out, one-by-one, into the battle field dodging mortar fire along the way.  In all, we we each ran a little over a half a mile during this engagement.

Unfortunately, after we had all returned safely, there was still more work to be done in order to fully dispatch those who would seek to do us harm.  Therefore, we proceeded to launch our own mortars into the field, but for some reason, command felt it necessary to send one of us out each time to retrieve intel (i.e. get the disc that had been thrown).  All the while, the troops did merkins as they awaited their brother’s swift return.

Thankfully, in the end, we all came back to base unharmed: Iron Mary, Sundrop, Bandaid, Hoist, Cramps, Wild Hog, Scotch and myself as did All 9s, Hedges and Half-Empty who had been sent on a reconnaissance mission while we were in the field.  In all, I feel it was a successful day, and we thanked God for our safe return.  In addition we were reminded that Thirsty Thursday will be at O’Haras this week, Christmas Party on December 14th, Dam 2 Dam on February 15th, and Iron Mary has Q this Thursday.

In closing, just know I love you and miss you.  But I also want you to remember, my love, that as we went out on this suicide mission this morning, I couldn’t help but think of all those who are struggling—especially this time of year. There are many of our brothers and sisters in arms who have returned from battle with scars unseen and who continue to fight the battle in their mind on a daily basis.  Keep them in your prayers, and keep a watchful eye on anyone you see who may be having a difficult time as we approach this holiday season.

P.S. Please pray for Hedges and his wife as they will be having their 3rd child next Wednesday, and keep Cramps’s daughter in your prayers as she will be having a tonsillectomy next Tuesday.