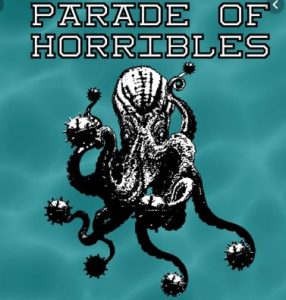 Conditions: Pre-Hurricane, a few drops, and the breeze helped

Tha Thang: 14 idiots gathered in the Target parking lot for a #blitzvergence to be forgotten. Most were present for last weeks IronPaxChallenge Week 0 workout. While it was bad, and caused a lasting soreness in the groinish area, it was not horrific. So, most returned. They may regret that decision now.

Pick up the Woodshed pax at 0530. Brief COP warmup.
Ash had laid out our course well after a little miscommunication #Cobainsdude. Only a few near-misses with incoming Target employees.

Introduction and Disclaimer given, brief demonstration of what the video showed.
5 rounds for time of the following:

There was Six-Picking and encouragement. Not a lot of mumblechatter, except for one dude whose names rhymes with DICEDST. Kotters to Pampers (that was a bad decision).

This was very hard, as expected. Several guys killed it, and the rest survived and got better.

One note though…As we gathered for coffeeteria, we heard that some dude had gone sub-15 in St. Louis. After that as we spoke and since on the socials, there has been a lot of talk about how that seems impossible, that there is no way somebody could do it properly at that speed. And YHC agrees that, given my incredibly slow time today, it SEEMS impossible. However, as I tweeted last week, there is always somebody better and faster, and history has shown that lots of things that used to seem impossible are now done regularly.

In many areas of life it pays to be skeptical. But here, in F3Nation, I think otherwise. We are all men, trying to be better in all walks of life (and for many, be like Christ). We are also brothers, even with those we don’t know in other regions. I think we should trust our brothers’ honesty and integrity, unless we are given some concrete reason not to. “It seems impossible” doesn’t meet that bar. Give the dude credit, he crushed it. I don’t think we should need video and proctors to accept that in this brotherhood. Encourage him and be pushed yourself to keep working hard to get better.

Announcements: None I can recall
Prayer requests: Hurricane victims and those in the path
BOM