The Conditions: 71 degrees with minimal wind. Summer is here.

YHC rolled up with just a few minutes to spare. I called the one-minute warning, which EZ quickly noted as being a minute early. I planted the shovel flag and started the disclaimer. I was informed that we were starting a minute late, so I guess I was off to rough start with my timing. Still, I was looking forward to the Q that I had planned so off we went.
COP:
SSH * 15 IC
Windmills * 10 IC
Mountain Climbers * 10 IC
Merkins * 10 IC
Burpees * 5 OYO

I instructed the pax to grab a block and return to the parking lot. We circled up, and I busted out a white board that I had turned into a Bingo card and a six-sided dice. At this point, I could tell that I had intrigued the pax, especially Fools Gold. He’s a sucker for a guy with dice in his hands. I let the pax know that I had seen a backblast from last week from the Roost. They had played a game of Bingo so I decided to borrow from their bag of tricks and create my own game. I explained that each pax would roll the dice twice. The first roll would indicate the first number of the square, and the second roll would indicate the second number. The pax would perform the number of exercises as shown below in each square until we collectively got BINGO! Additionally, rolling one six with any other number would mean that we would run to the bottom of the driveway and back. Rolling two sixes would mean that we would be surprised with a mystery exercise. As luck would have it, we got to find out that this exercise was 50 monkey humpers (you’re welcome Turkey Burger). So off we started. I’ve included our board showing the deets, as the kids say.
B – Burpees
I – Overhead Press
N – Bent Over Rows
G – Squats
O – Flutters 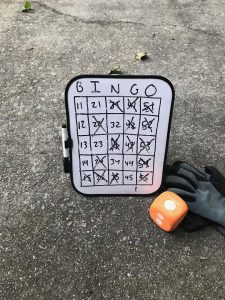 I will say that the dice were kind to us this morning. We didn’t have to run, and we only had to do one set of burpees. Putting burpees on the board could have gone south very quickly, but it was a risk that I was willing to take.

As a reward for winning BINGO, we moseyed over to the top of the driveway. We had a little time to kill so YHC decided that the reward would be Elevens, starting with 10 curls at the top and one Man-Maker at the bottom. We were about to get started when we heard that lonesome whistle blow, and we all knew what was coming. After a few rounds, I had the pax stop to do five burpees in honor of the train. This was a real crowd-pleaser so I knew we were living right. About halfway through the sets, I had the pax modify to merkins at the bottom. Moose quickly responded that he had already done that a few sets back.

Time was growing short so YHC called for the pax to return their blocks and circle up for Mary, which went like this: Hello Dolly, Rosalita, Freddy Mercury, and Boat/Canoe (or Canoe/Boat depending on how you want to look at it).

Good work was done by all pax in attendance. Thanks for the solid effort men.