Having been the ONE pax to post before (#401KRun)- and also remembering a time when Moose was Q and no one showed for his workout, it’s easy to agree with Three Dog Night’s assertion. Today though, YHC was determined to prove that one isn’t always the loneliest number. (Editor’s note: Does that guy ever open his eyes during the entire song? YHC stopped watching after 1:33 mark)

And, in honor of a Depot #UTP, Arrears, YHC chose to do so in spanish…or espanol for those who are fluent in the language of love.

But I digress. #LoveThatSong Don’t @ me.

11 pax got all 3 Fs today with a game of Uno on the sacred grounds of Depot.

Today’s themed workout comes from YHC and fellow pax sometimes sitting around on weekends and playing Uno (betwixt consuming some alcoholic beverages – that is if you count Ultra as an alcoholic beverage). Note: Usage of “betwixt” in honor of the return of Fools Gold from weeks in Portugal (#humblebrag) last backblast. If you aren’t as big a fan of backblasts as YHC, you should be – and you should go peruse the novels that are Fool’s Gold’s love stories .

So, as YHC is prone to do, I spent yesterday (actually today since I’m currently typing my backblast Monday evening) preparing for a Q that I hoped would invigorate our minds and bodies – and hopefully provide some great mumblechatter, 2ndF, and maybe even generate a future VQ next month.

One of the biggest #FakeNews around is that F3 is a free workout. Actually, it’s pretty close; but thanks to Tentpole getting my house sold today, I cleared enough to purchase a set of Uno cards and got to work. If you’re still in the bathroom reading this, continue on… 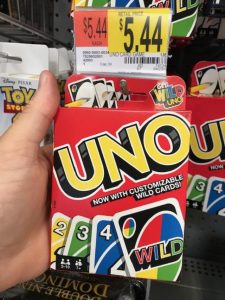 Conditions A decent 69 degrees with 10 mile visibility and breeze blowing SSE at 2mph. UV index was a 0.

Indian Run around outer loop to block pile. We noticed some friends that Neckbrace had delivered for us. New, heavy, and dirty. 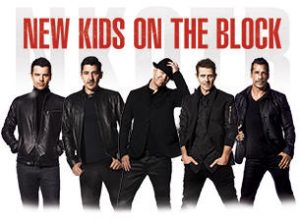 Q instructs pax to “grab a block” and circle back up in parking lot. Note: We now have 25 – let’s hope we get back to the days when we worry we will run out of blocks at workouts!

The deck of cards was distributed to pax with the rules being very simple. Same basic Uno rules: pax try to play all cards in hand, calling out “Uno” when you have 1 left, winner is pax to play all cards first.

The exercises were simple motions:

The pax playing the card would lead the exercise. This helped pax who have never Q’d gain a (false) sense of comfort with doing the count in front of a group. Hopefully they will sign up on the Depot Q sheet after the workout.

To speed things up, no one drew a card if they couldn’t play. Instead 3 burpees OYO while pax watch (and critique form).

Special cards: The 3 pax who had these cards in their hands will be asked to Q in August and have the help of the pax listed if they prefer to do a coQ instead.

Whitney, Devito, and Laettner received those cards. Looking forward to a VQ from Whitney! 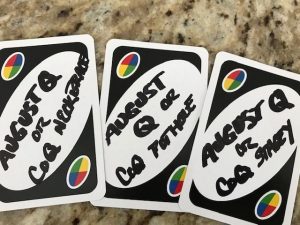 That’s it. We played cards and worked out. Nothing fancy.

Total reps for the game were:

Ran out of time with Devito having ONE card left. Lucky for him it was Yellow 1, meaning he only had to do 1 SSH IC to finish his hand. The rest of the pax had many more reps left in their hand to complete before we put up blocks and started Mary

Moleskin: I think it was Marcus Aurelius who originally said “There was a dream that was Depot. You could only whisper it. Anything more than a whisper and it would vanish, it was so fragile.” Or something like that. 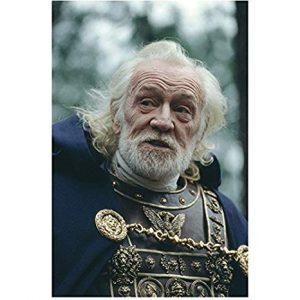 Depot’s numbers are down from the days of 20+ but after a 2ndF get together with many pax, look for another resurgence. New workouts. New Qs. More EHing. More 2ndF. Come be a part of building it back and introducing more men to F3LakeMurray. There are too many sad clowns around us that need us. Remember, you once were one until someone got you out in the gloom!

August 10th – F3LakeMurray convergence Strut. Word on street is it’s AO competitive. Let’s be sure all the #UTP of Depot are present.

Gonna have to #HallMonitor myself here. YHC forgot Devo after our prayer today. I didn’t bring one but halfway during the workout I remembered and decided to wing it with this below…but forgot. So, here it is.

“For I know the plans I have for you,” declares the LORD, “plans to prosper you and not to harm you, plans to give you hope and a future.

Never was that more true than the past 6 months while our house was on the market and we were looking to move. I’ll spare most of the drama (many of y’all have experienced it, I’m sure) but I wasn’t sure where we would live and if I would continue my public service. I had told my wife I was fine moving “wherever she wanted” (inside the district or not). Originally my wife wanted to move to Timberlake (out of my political district) and I was fine with that and accepting that maybe that was God’s plan for my time of serving to end. Tentpole showed us the house a few times and the day we called him to make an offer someone beat us to it! The M was crushed. You can imagine. Weeks later we found another house and actually had a ratified contract, only to have someone take us out a month later since our offer was contingent upon the sell of our house and their offer wasn’t. You know the drill. Fast forward, I took a leap of faith and we put a contract on what would end up being our new house (it’s in the district) but we bought it before our house sold. Staring at the stress of having 2 house payments was always on my mind. During this process I learned that I was not in control – at all. Long story short, we closed on our Lakeside house yesterday…2 days before I would have had 2 house payments. Here I was worry about things that never ended up happening. I learned I needed to trust God and that it is His plan for us, not our plan for us that matters. I’ve grown in the past 6 months thru a Bible Study (book of James and others – slow to anger, etc) and also learned that “everything will work out” in the end.

Everyone is going through something in life. It’s easy to say “it will work out” but just know, it always does. Pray. Let go. Let God do his thing!