This past year has been rather difficult for me.  Weather became warmer, I found myself in a great deal of pain.  Walking was a challenge and the maneuvers we are called upon to complete were all but an impossibility.  Thanks to these magical needles that would pulse like ****REDACTED**** and the amazing hands of a beautiful physical therapist, I was finally able to return to action.  (No need to be jealous, my love! the PT, known to some as “Zeta” is the wife of All 9’s.)  It was only a few months later, however, that I would, once again, find myself sidelined.  Due to an ongoing issue, I had to undergo a common, minor procedure that should’ve only kept me out of action for a week at most.  Unfortunately, however, infection set in, and the pain was excruciating.  Needless to say, I wished you were here to nurse me back to health by kissing it and making it all better!  (Incidentally, Martha, I have some rather disappointing news concerning any future plans of having more children.)

Currently, I am trying to get back into the swing of things, but, as I have been out of the habit engaging in daily battles, it has been a challenge.  The last several weeks, for instance, I have been on the USO tour, entertaining the troops, which has resulted in many late nights.  (For tickets to the Village Square Theater show, “Newsies” click here!)  But it is my plan to renew my commitment and return to action fully by the end of the month.

Before closing, my dear, I did want to tell you about a recent experience I was able to participate in.  It was unseasonably warm and overcast in the early mornin 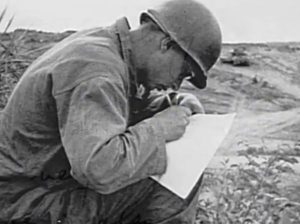 g of February 13th, when I gathered with 10 of my companions: All 9’s, Cramps, Grave Digger, Iron Mary, Slumlord, Dangle, Stalker, Kenwood, Wild Hog and Hoist.  (Hedges was with us earlier but was called upon to carry out a more important mission).  We began with prayer and disclaimer and then gathered for a quick warmup (Side Straddle Hops and Through the Tunnel x 15).  We then proceeded to move with haste to the battle but were forced to stop a couple times to check the area for the enemy (Imperial Walkers and Dips).  When we finally reached our destination.  Once there, we found ourselves traveling up and down Tomcat Hill stopping only to do merkins and LBCs.  We did this for some time and then moved with caution back around to the base to end our mission with heal touches and prayer.  When it was over, we all made it back safely and unharmed.

In closing, Martha, I must say that I can hardly believe it’s been two years since my deployment—two years since I ate a good cheeseburger, slept late, or held you in my arms and ****REDACTED**** while you ****REDACTED**** with a ****REDACTED****.  I must admit, however, even though it has been painful to be so far from you, I still firmly believe in this endeavor, the daily battles we fight, and, most of all, the men in the trenches with me.  Were it not for them—their support, their accountability, their companionship— I don’t think I could bear it.

P.S. Please keep Scotch’s father, who is undergoing testing and moving in with Scotch’s family.  Also, Dear Diary as well as Faye’s family, and, of course, all marriages as we struggle through this battle.  (We also continue our prayers for Grave Digger’s mom).

P.P.S.  Don’t forget the Dam to Dam this weekend (last weekend), and the Gut Punch which happened last Saturday.