We then set out to wander the streets of Shandon, up and down hills, in search of something only known to each of us. The pace was fast. YHC wanted to cover as many miles as possible while stopping for 10 pain stations. We did the same 3 exercises and the same amount reps at each one for a total of 100 Hand Release Knerkins, 150 Catcher Squats and 200 Heel Tap Crunches. After the last pain station, we covered the last .5 mile back to the flag at a fast clip. 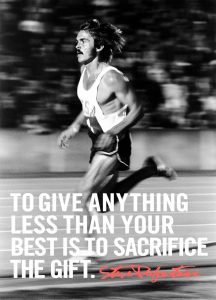 Moleskin: We covered 2.3 (it felt like way more) miles and everyone gave great effort and utilized quality form. There was a brief Paperboy encounter. He was not included in the F3Counts. It’s powerful what you can do when not focused on yourself. The last thing any of us wanted to do was burpees after grinding out the miles and reps mentioned above. The example of the 21 Burpee Salute goes to show that when you are Living Third, living for something greater than oneself, you can accomplish what most won’t be able to. TClaps men. Work was done!